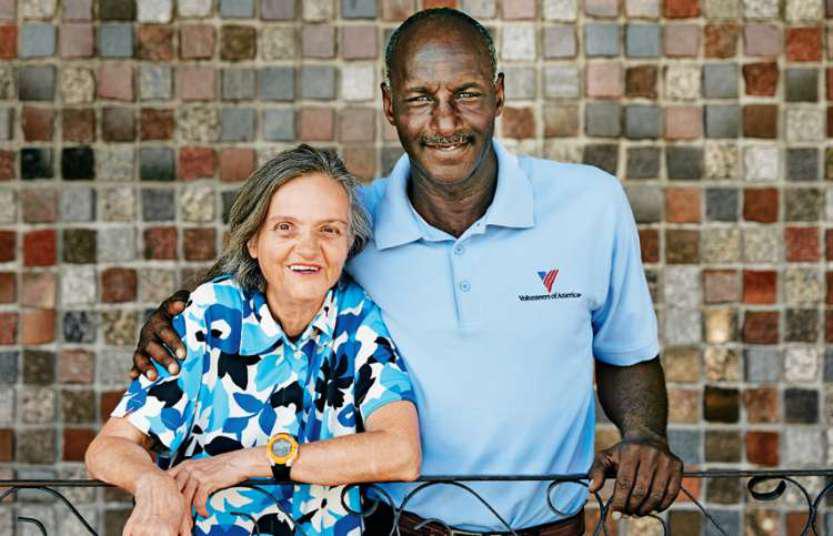 In 2003, the note arrived for Carl Payton the way Stella Delaughter’s messages always did. In a white envelope. Slipped under his door in the middle of the afternoon when nobody was home. Like they were spies communicating covertly. “Gazebo, 2 p.m. tomorrow,” the note read. Carl marked the day and time in his calendar, chuckling. Only Stella.

They’d met 14 years earlier, in 1989, back when Carl was new to his role as a facilitator in the Supported Independent Living Services program at Volunteers of America in New Orleans. At the time, Carl had eight clients. All were special. But Stella? She stood out.

Maybe it was her happy-go-lucky personality. Or the way she always called him Carl, as if they were old friends, instead of “Mr. Carl,” the way his other clients did. Or the fact that she ended up living in the same apartment complex as Carl and his wife. Wherever he turned, Stella was there.

Carl looked forward to their get-togethers. Stella had an intellectual disability and struggled with vision, hearing and anxiety issues. He met with her for 10 hours every week. Sometimes she needed help figuring out her bills, other times a pep talk.

And yet she was fiercely independent. She’d venture out into town by herself to get pet food or cross a busy highway to reach the bank instead of waiting for Carl to drive her. After all, she’d managed on her own most of her life.

Stella had been born with a hole in her heart and was raised in foster care. She had no family nearby to depend on. She thrived in Supported Living Services. So much so that, three months into her tenure with Carl, she was discharged from the program.

Carl was no longer her caregiver. But the notes kept coming.

Carl joked that he was Stella’s security blanket. Not that he minded. It was in his nature to help others. He’d grown up outside of New Orleans on his grandparents’ farm, a Low Country boy through and through. Faith, family and service, that’s what his family was all about.

Granddad was a farmer, but on weekends he became the neighborhood’s barber. He’d go from house to house, cutting hair for free. His little way of giving back. Grandma was the same way. She’d wake up at three o’clock in the morning to prepare Sunday supper for their pastor.

It was Carl’s job to drive her into town for groceries. She’d go through every aisle at the supermarket, shopping and dishing out life advice at the same time. “Treat others like you’d want to be treated, baby.” “Always, always look out for your family.”

After college, Carl worked at a boys’ home, then moved on to Volunteers of America. He thought he’d only be there a year or two. Now, nearly a decade and a half later, he couldn’t imagine life without his clients. Yes, there were hard days. But he’d found his calling. That was for sure. Serving others was his way of serving God.

Carl waited for Stella at the gazebo at 2:00 p.m. sharp, just as she’d instructed. He waited. And waited. She never showed. Maybe he should check on her. In all the years he’d known her, he’d never been to her place. She always chose their meeting spots. Carl walked to her apartment and knocked on the door.

Carl wished he could return the smile. But he was dizzy from the stench that emanated from inside. He glanced around the cluttered one-bedroom apartment. The carpets were stained yellow. Even the walls. And that smell. The culprits were sitting in the living room. Stella’s cat and miniature poodle. There was no litter box. They’d marked their territory on every inch of the place.

Had Stella been living like this all this time? Carl hung his head. Stella had to get back into Supported Living Services. That was clear. As independent as she was, she needed help maintaining her apartment and taking care of her pets.

Carl got Stella back in the program, resumed his role as her facilitator, then tackled the next challenge— that smell. He spoke to the apartment-complex management team. They couldn’t do anything about the carpet and the walls, not without evicting Stella.

So Carl took matters into his own hands. He rented a heavyduty carpet cleaner and got some paint. His team freshened up Stella’s apartment, even decorating and putting up curtains. Pretty soon Stella was back on her feet, her apartment squared away.

But that didn’t mean that Carl was off the hook.

Twenty-six years after they met, Stella continues to slip notes under Carl’s door. When he’s driving clients around the city, she insists on riding shotgun. And they still live in the very same apartment complex. In fact, if Carl and his wife ever find a new home, he knows Stella won’t be far behind.

“Wherever we move, Stella is gonna have to have the mother-in-law suite!” Carl says, chuckling.

Stella’s more than a client. More than a neighbor. She’s family.

Learn more about how our EMPLOYEES are Living Their Faith